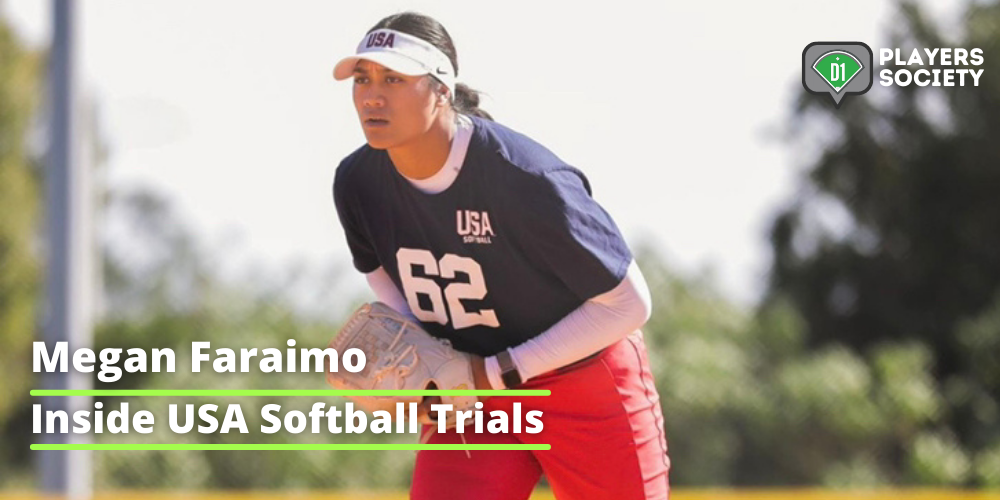 D1Softball, through the D1 Players Society, has partnered with UCLA pitcher, Megan Faraimo to bring you an inside look at her experience with the USA Softball Trails back in January.

I was sitting in a lecture when I received an email inviting me to the 2022 USA Women’s National Team Trials. None of my classmates could see my mouth under my mask, but I sat there with my jaw dropped and eyebrows raised in nervous excitement for a solid minute, rereading the email just to make sure it had my name attached to it. After I gathered myself, I put my phone away and finished taking notes – although to be honest I don’t think I was paying attention to what I was writing. Class ended and I sent a screenshot of the email to my biggest supporters: my parents and brothers. They all replied with their congratulations, but I didn’t text back.

I only sent that to let them know where I’d be that first week of January. I was already in go mode.

My mind likes to do this thing where I won’t get nervous until the morning of competition, no matter what level of competition that is, so I knew the nerves wouldn’t come until later. Knowing this about myself allowed me to purely focus on preparation, both physical and mental. My expectation heading into the try out was that it was going to be hard, and that was it. Treating that as a fact allowed me to train in a way that would put me in the best possible position for success without listening to any doubt that is bound to come to an athlete’s mind. It allowed me to approach my training logically, not emotionally. That meant that when I had doubts, I also had answers.

“This try out is going to be really hard!” Duh, that’s why I’m training.

“But these hitters are really good.” I know, that’s why it’s going to be fun.

“Are you ready?” Ask me that again after I pitch this bullpen.

Nothing good comes from feeding into negative thoughts so I did my best to let them go and keep working. By the time I got to the airport and saw a couple of my teammates from UCLA ready to try out with me, I felt calm. What I had done to prepare was all that I could do, all I had left to do was show up and show out.

Being invited to that try out meant that the hard work I had put in was worth it, and that I was one step closer to reaching one of my long term goals of playing the sport I love at the highest level. It meant that if nothing else, I had the opportunity to play alongside the best in the game and learn as much as I could for a week, which in itself is an opportunity of a lifetime.

How many players can say they played with and learned directly from their role models, even just for a week? I felt blessed to be considered among some of the best and hoped that I would prove myself deserving of that honor when I touched down in Florida. My family, coaches, and teammates have sacrificed so much for me and believed in me for so long that being invited felt like a win. I wouldn’t admit that to anyone out loud, though. At that point I was in a competitive mindset and the only dub that I was focused on was making the team.

When I arrived in Florida, I tried my best to not seem too starstruck – I had to play it cool – but I definitely had moments of fangirling on the field while I was pitching. At one point I was just like, “Dang, Amanda Lorenz is really playing first base for me right now,” but then I had to focus up because the lineups were no joke.

On both teams, there was no break in the lineup, so I had to be intentional with every pitch I threw. This level of focus was mentally exhausting but I loved every second of it. Watching swing paths, tendencies, successful sequence patterns pitchers used in other scrimmages, and trying to figure out the mentalities of all the hitters was really fun for me and I genuinely loved competing against them.

The first game I threw, my goal was to show only some of my pitches and save my others for the second day. This was a bit of a risk – it meant throwing some of my better pitches later and less often that first game, but I felt it was a risk I had to take. Just like how I was scouting them, they would be scouting me. I had to use every advantage I could to beat the batter, and playing head games was a part of that. If they thought they knew something about me after that first game, I tried my best to keep them honest for the second. I left it all on the field, showed everything I had to the committee, and competed as hard as I could.

The culture created in that one week of softball is one that I imagine many programs across the country aim to achieve. With so many elite players in attendance, it would have been easy for any one of those players to be stand-offish, but no one was. The level of play was one thing, but what stood out to me were the conversations, attitudes, and selflessness of the women and staff participating in the try out.

One of many conversations that stuck with me is one I had with USA Softball veteran Hannah Flippen and Arizona catcher Sharlize Palacios during our lunch break. Being younger than Flip with no experience in post-college ball, Sharlize and I had a lot of questions. We eventually started talking about pro ball and Flip made a comment that captured the vibe of the camp. She said something like, “We don’t play for us, we play for you and your opportunities,” pointing to Shar and I.

We talked about how softball has grown tremendously over the past few years, but financially there’s still not much to be gained by playing the sport professionally in America. Flip said that the goal of most of the women playing pro now is not to make serious money for themselves – there isn’t a significant amount to be made – but to create that opportunity for future generations.

It made my heart happy to hear that so many women care about this sport, and I felt forever grateful to the women who have, who are, and who will pave the way for softball to grow even more. It’s a good memory, for sure: three San Diego natives talking about our dreams for the game we love, eating lunch before we headed back out to the field.

being surrounded by good humans who also happen to be the best ballers in the country for the past week was just 🤌🏾💋
beyond grateful for the opportunity to learn from and try out w this group!! https://t.co/lY2kc4yyuO

I intentionally didn’t set an alarm the night before the official announcement, hoping I’d wake up after they announced the team so I wouldn’t be awake to feel the nerves. Unfortunately, my body had other plans and I woke up a couple hours before the announcement, so I had to wait out my anxiety. It was not a feeling I enjoyed, checking my phone for any emails and looking up the time difference like ten times to make sure CST was still two hours ahead of PST so I’d see the announcement right when they said they’d send it out.

I had a similar reaction to finding out I was selected for the trails – excited, but ready to get to work. Eventually, I told my family and accepted the invite to the Japan and Canada Cup games, taking in what an honor it is to be selected to represent USA Softball this summer. I’m incredibly grateful for the opportunity to wear USA across my chest and I look forward to competing against the best players in other countries. I can’t wait for summer to come around!

Well, I can’t wait… but I also can. I have some business to take care of at UCLA first.

Coast to Coast with Jada Cody
Scroll to top