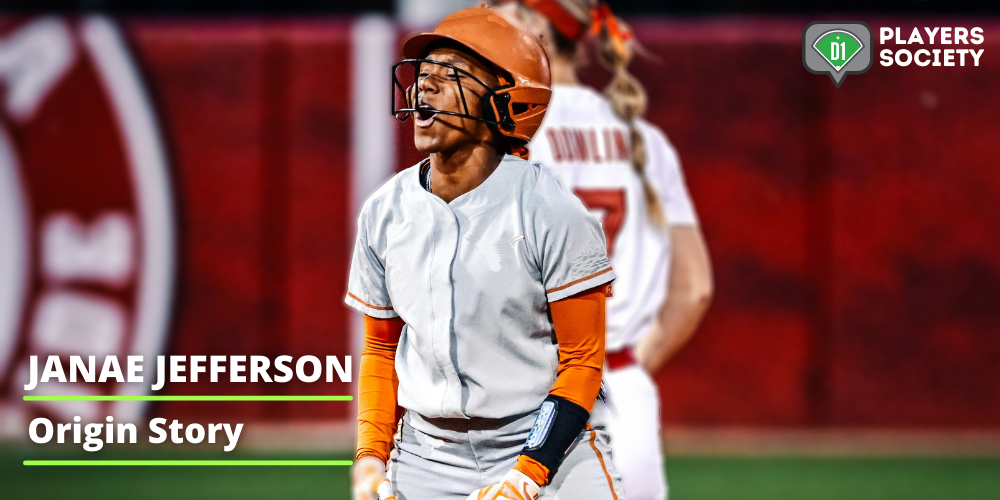 D1Softball, through the D1 Players Society, has partnered with Texas infielder Janae Jefferson, to share her story of growing up and going to school in her home state of Texas.

Texas was my first official offer in spring of my freshman year. I had schools all throughout the Big 12 and SEC that were looking at me, but overall the University of Texas was my dream school and I have always wanted to wear the burnt orange and be a part of the Longhorn family. I decided that there was no point in waiting, so as a freshman in high school I committed to go on to be a Longhorn after graduation. From that moment on, I would always see Coach Connie Clark, Coach Jennifer McFalls, and Coach McKay at my travel ball games as a way of making sure that I continued to get better, smarter, and be well prepared to contribute coming in as a freshman at Texas.

The factors that played a role in the decision making of attending the University of Texas was the coaching staff at the time, the city of Austin, and as well as the academics.

I had a great relationship with the coaching staff during my recruiting process. Growing up I regularly attended camps at Texas and that really allowed me to build relationships not only with the coaches, but with the current players that were living the dream that I was hoping to achieve someday.

Another major factor in my decisions was the educational side – the academics at Texas are second to none. I knew going into college that one day my softball career would end, so I wanted to make sure that the degree that I would be receiving would allow me the opportunity to develop a successful career after softball. Not only did I choose to go to UT for softball, but for the educational aspects and experiences that the university as a whole provided as well.

I always knew I wanted to go to a school in Texas, or in the south, because my family’s support means a lot to me. I wanted to be close enough to home so that my parents would be able to attend my games as well as tune in on television, via the Longhorn Network, whenever they were not able to be in the stands physically.

Another major draw to UT was the city of Austin itself. One of the things I enjoy most about the city of Austin itself is Lake Travis. My teammates and I often go out on the lake to go canoeing or paddle boarding as a form of team bonding, and to soak up the sun. This is one place that I will really miss if I end up moving on from Austin because it was a spot that always involved having fun and spending quality time with the teammates.

After college, I plan to live in Texas. I feel that the whole state has a lot to offer and I have yet to explore the rest of it outside of Houston, Dallas, and Austin. I feel that there are large amounts of opportunities here and I cannot wait to see what life has in store for me years down the line.

It means the world to me to be representing my home state along with playing close to home simply because as Texans we do everything with pride and determination. I feel that this is something that I carry with me on and off the softball field. There is no better feeling than wearing Texas across my chest and knowing that each time I step out on the field I am playing for something much greater than myself. I cannot be more grateful for my time spent at this university.